POLITICS :: I found the writing on Ten Principles of Mao Zedong

Awhile back I shared something about a writing I had found on the Communist agenda to take over the world.  I couldn't find it at the time so I just shared what I could remember.  This week I have been sorting through more of my "piles" of papers and discovered it again.  I have to just list it as text here as I don't have anything else to post yet.

THE  TEN  PRINCIPLES  OF  WAR

Wiping out the enemy's strength is the main objective, not seizing territory.

Only attack enemy forces that can be completely overcome.

Fight no battle you are not sure of winning.

Have courage in battle and no fear of sacrifice or fatigue.

Attack the enemy when he is on the move.

Use captured arms and personnel to reinforce.

Rest, train and consolidate in short intervals.  The enemy should be permitted scant breathing.

I had never seen anything like this.  I think it was when the Communists were first starting out, becoming a power... but I am not sure.  I just remembered the concept of isolating and then overcoming.  I think that is what I shared before.

If we apply this to the Internet, there are very scary possibilities in our current life and in the our futures.  Remember, I have searched for info that could apply to the Antichrist for most of my life.  And we know that evil will rise in all kinds of ways as we get nearer to those times we read about in the Bible.

This lockdown year has been like a "trial run" to me... someone flexing their muscles to learn how to do it better next time.  I would say that "isolation" has been the foundation of our lives this year.

As individual citizens, we have seen people arrested for not wearing a mask in public.  What does that tell you?  And why would anything like that be an arresting offence?  We are forbidden to gather at church or other spaces... killing all kinds of businesses and community fellowship.  It's scary.  We can't see the reasoning and don't have the power to object.

The Internet is a battlefield that can kill and maim and destroy... with no way to know it has been orchestrated.  Two past actions that I noted, and a possible third, speak to this danger.

Other "disasters" we have seen could easily be computer connected.

The other day I was thinking about the increasing surveillance we are experiencing and I remembered a LONG time ago finding out that California was building tracking systems into the freeways and cars are able to be tracked by that system because a unique "chip" is installed in every vehicle.  That was years ago.  I have no idea where that plan is now.  I assume it is for "safety" purposes, like police chases.  In the future it will be a tool to know every movement of every vehicle.

There a "chips" in the body now, as a "safety" measure for those who have never read the Bible and don't know about the Antichrist.  Commercial payment methods are heading toward this.

It seems unrelated to the Communist writing above, but the way of war has changed.  We have so many people that are hailed as examples of what to believe in, and they are focused on the ideology of Communism and Socialism...  John Lennon's song, Imagine, is an example of what the theme of Communism is, but not how it exists in real life.

I was impacted by the "isolating" theme.

The entire process is more covert than a battle you see and can fight.

I don't know what we can do... as ordinary people.  If we are isolated, there is less we can do.  Gathering into groups that care for one another is what the BODY of CHRIST is all about.  We may need to start getting into those groups now.

Yes, Working Together was meant to do that because of the reality of the Antichrist... before I even discovered this writing about Communism and War.  Now, with mega-churches in our cities, I suppose we need to think of each church taking care of its own, or joining the bigger churches near them.

I hope you read the list of tactics over and over and then think about how it would be implemented in your life, or your community. 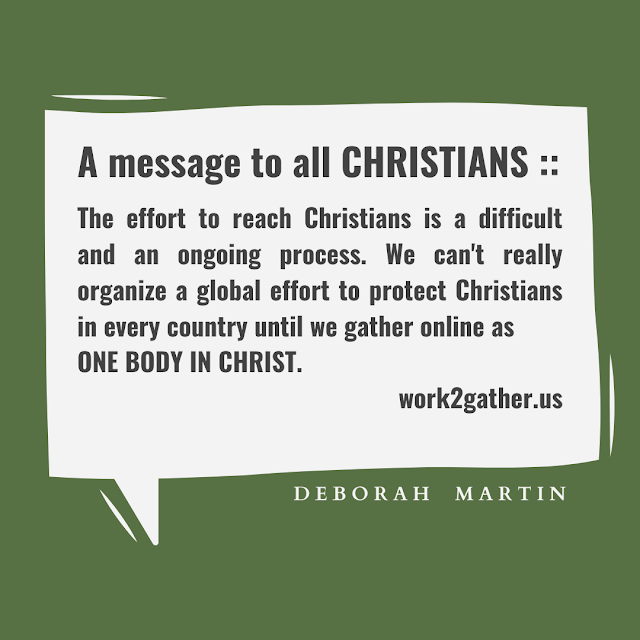